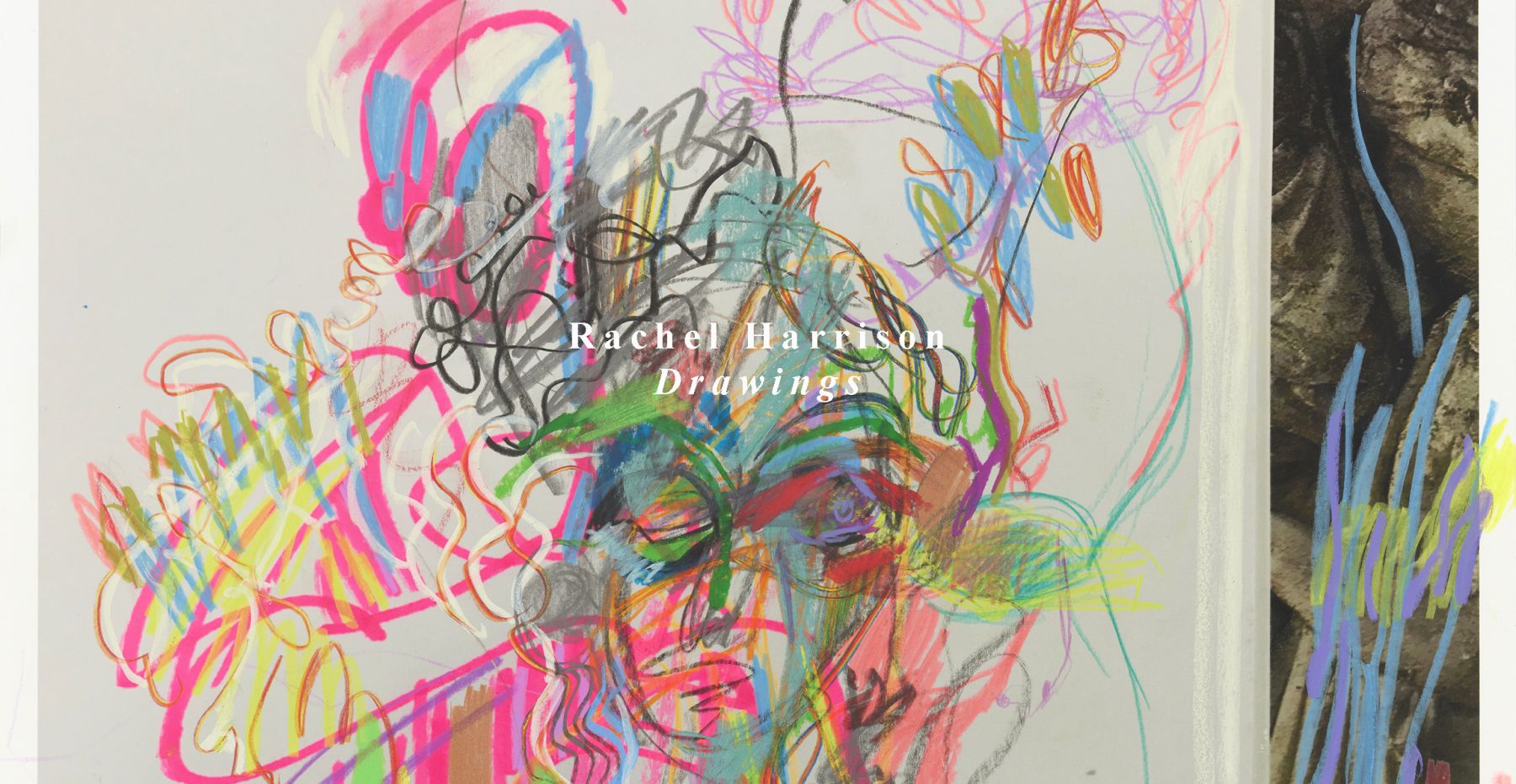 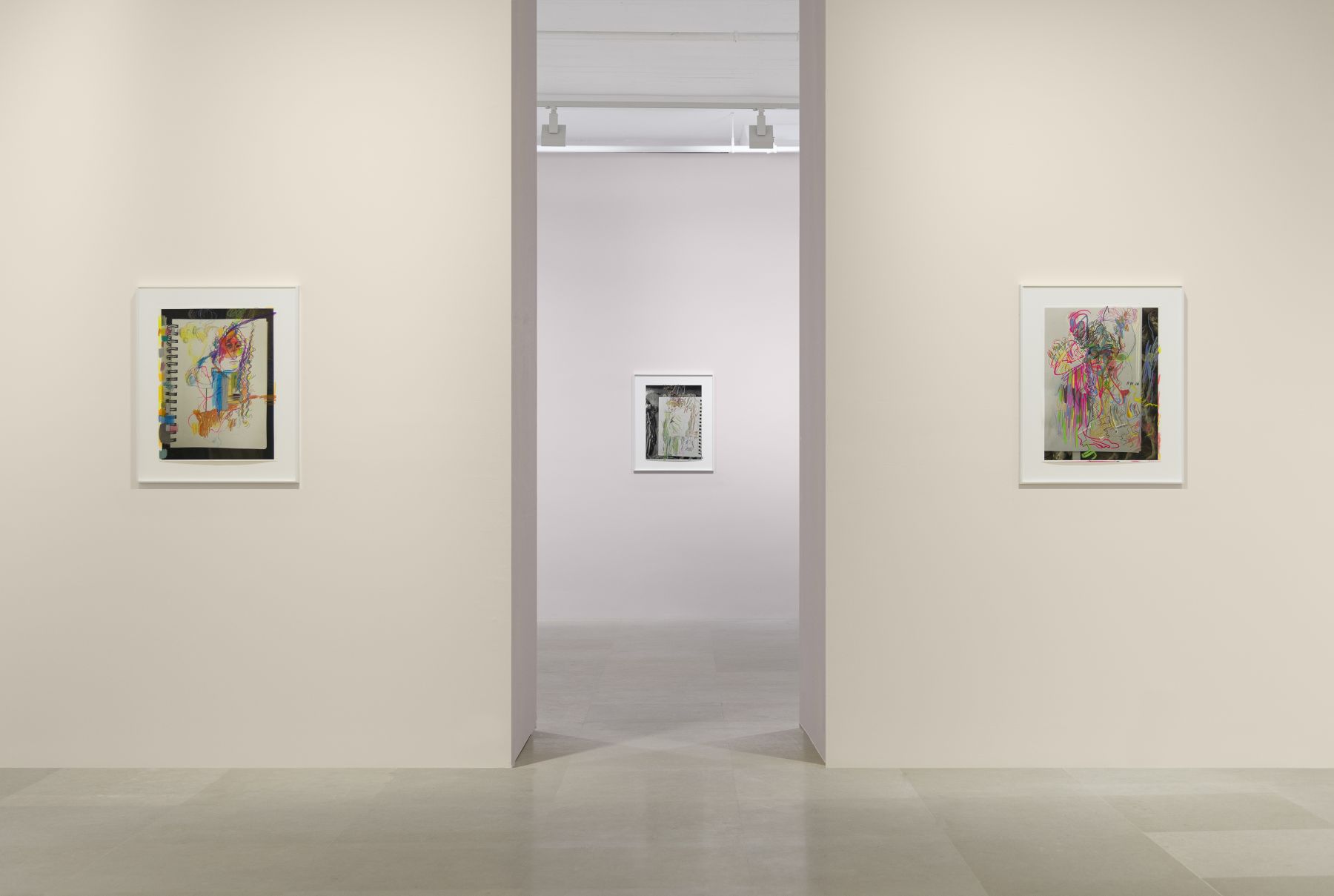 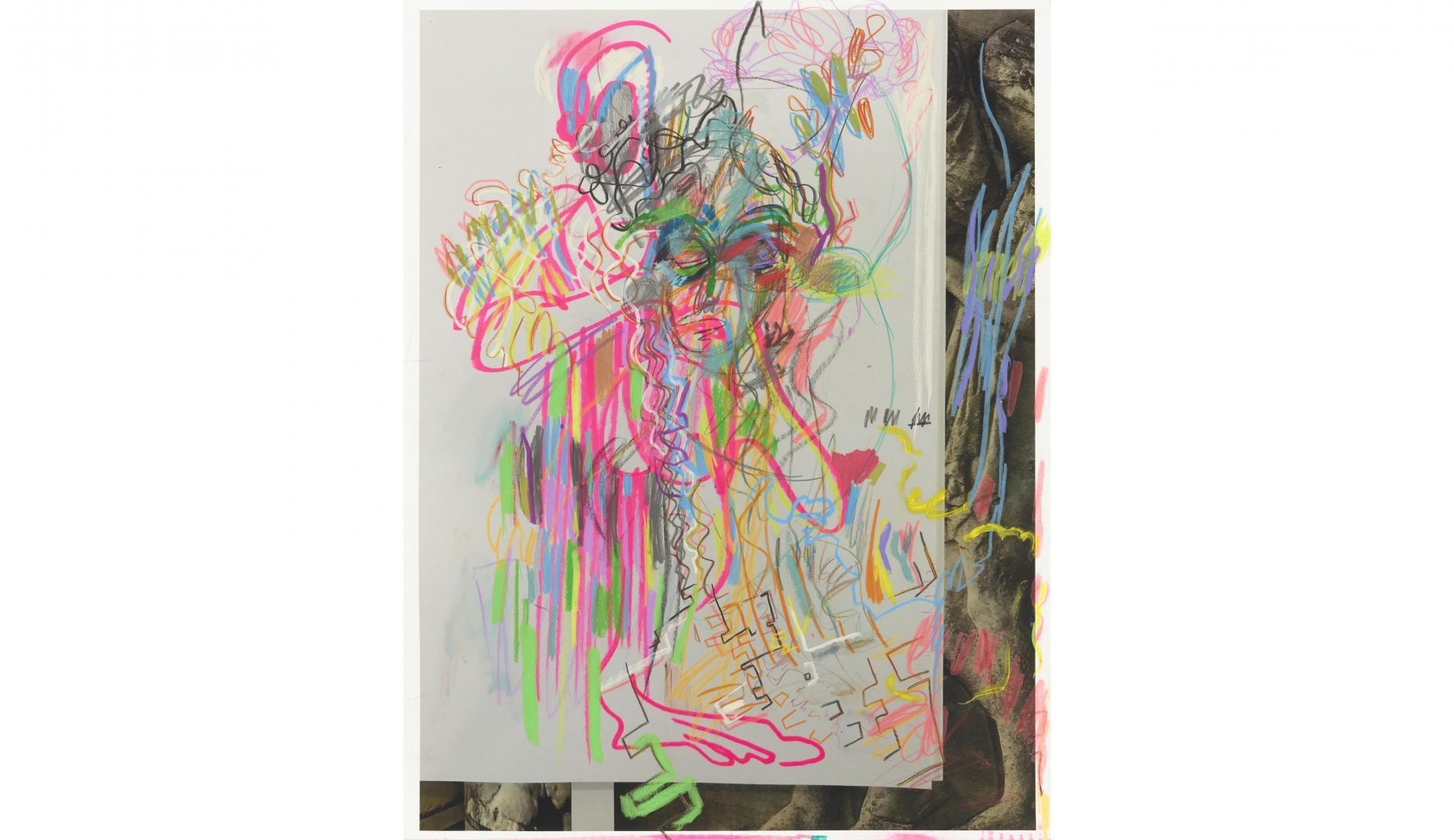 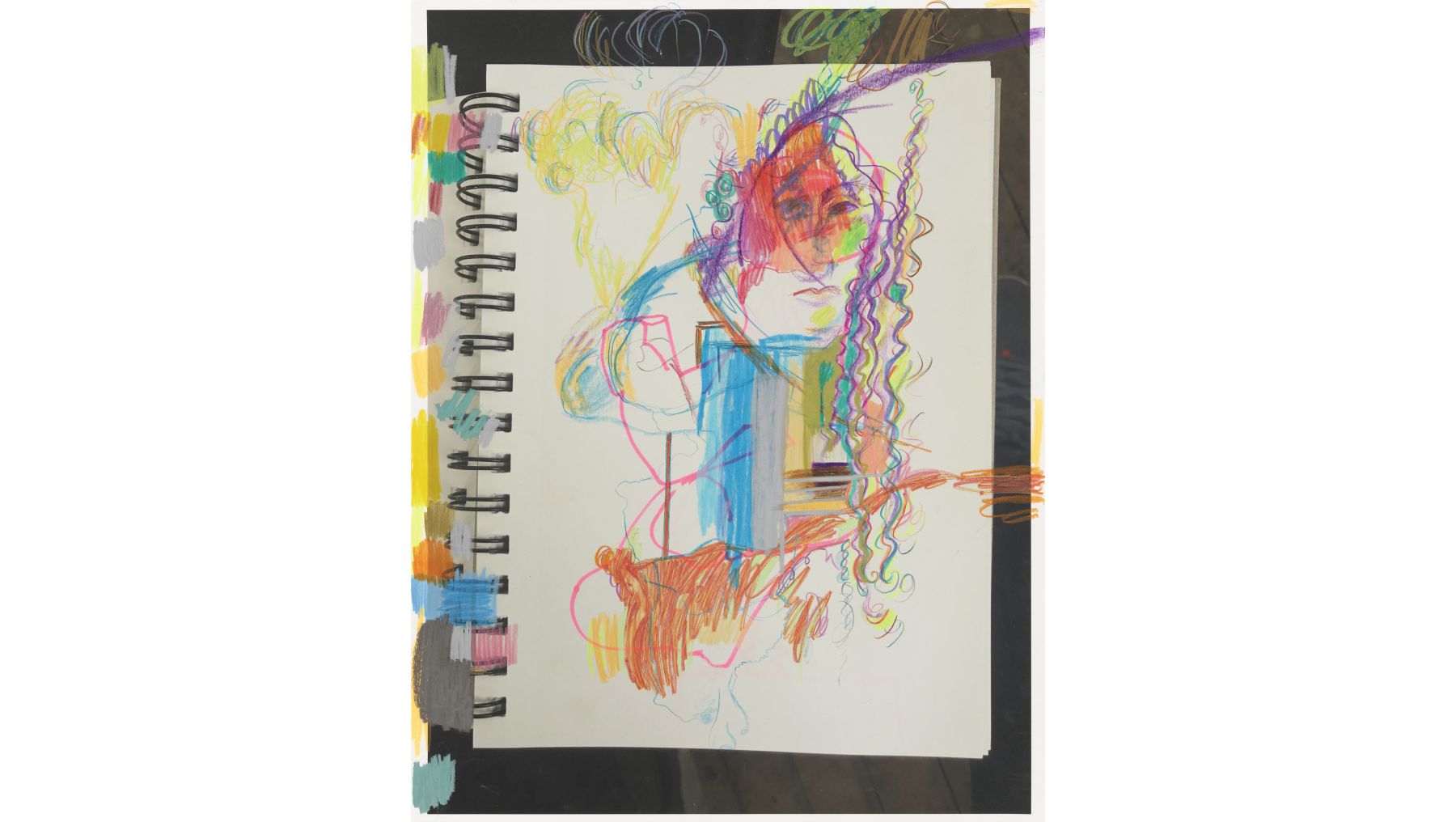 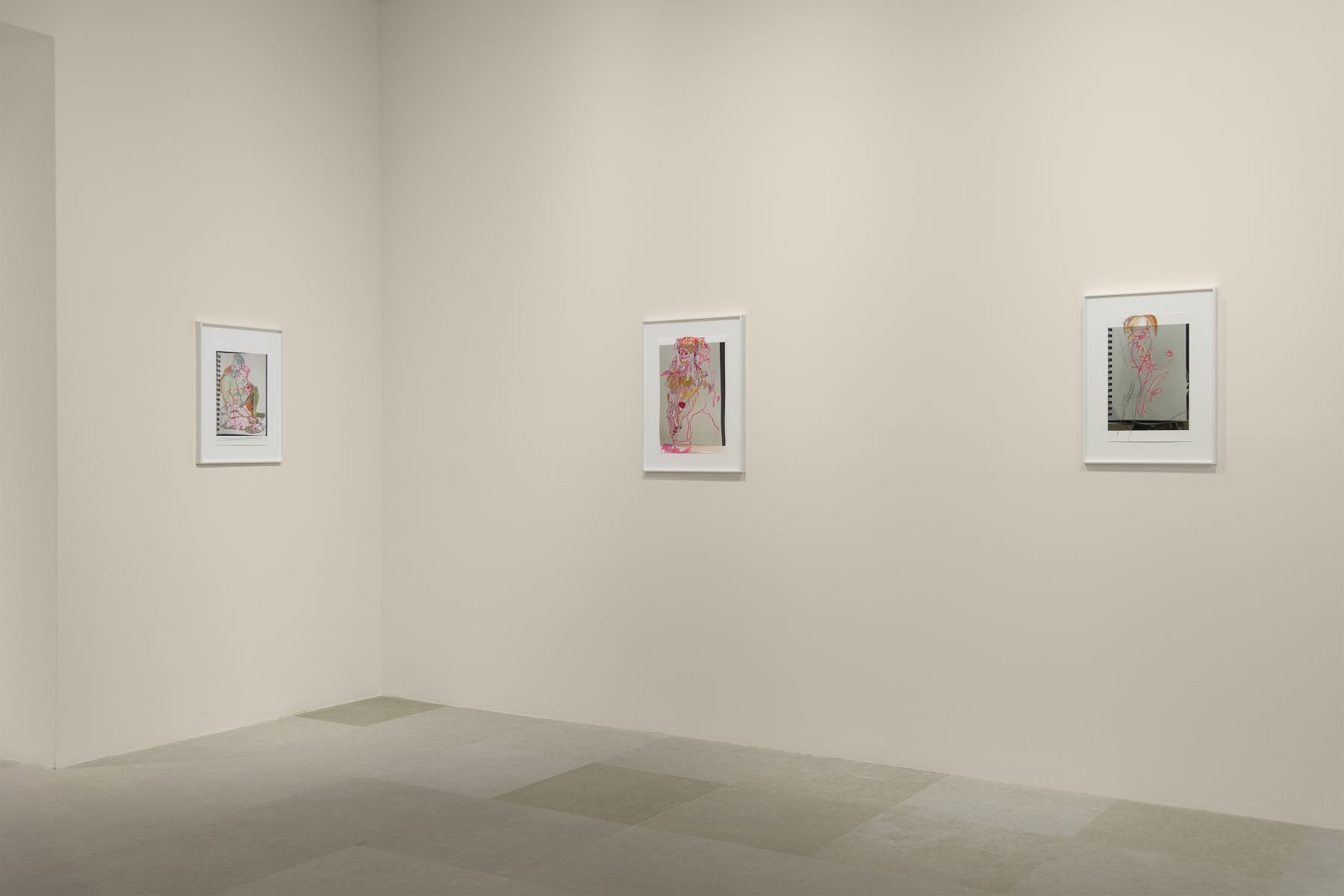 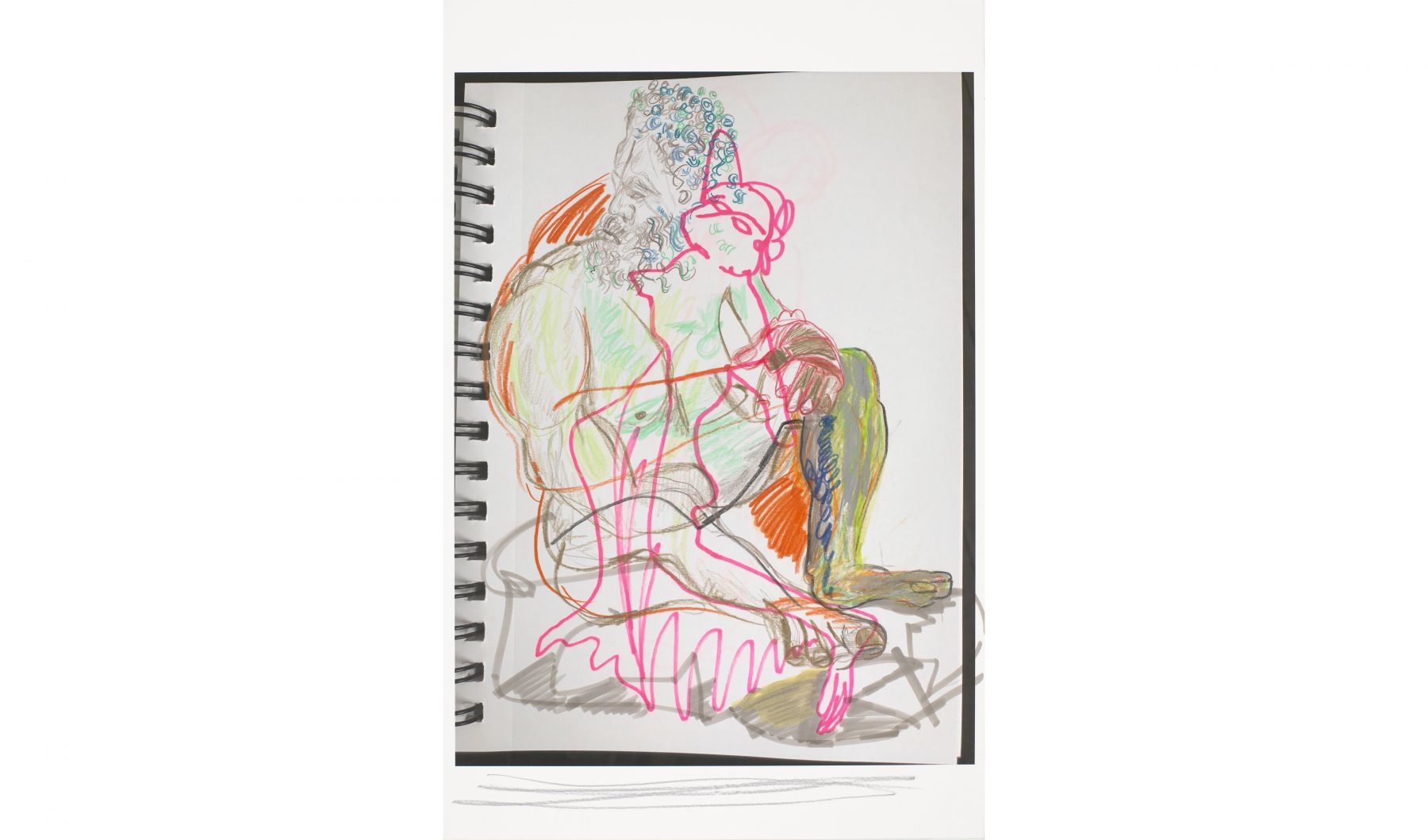 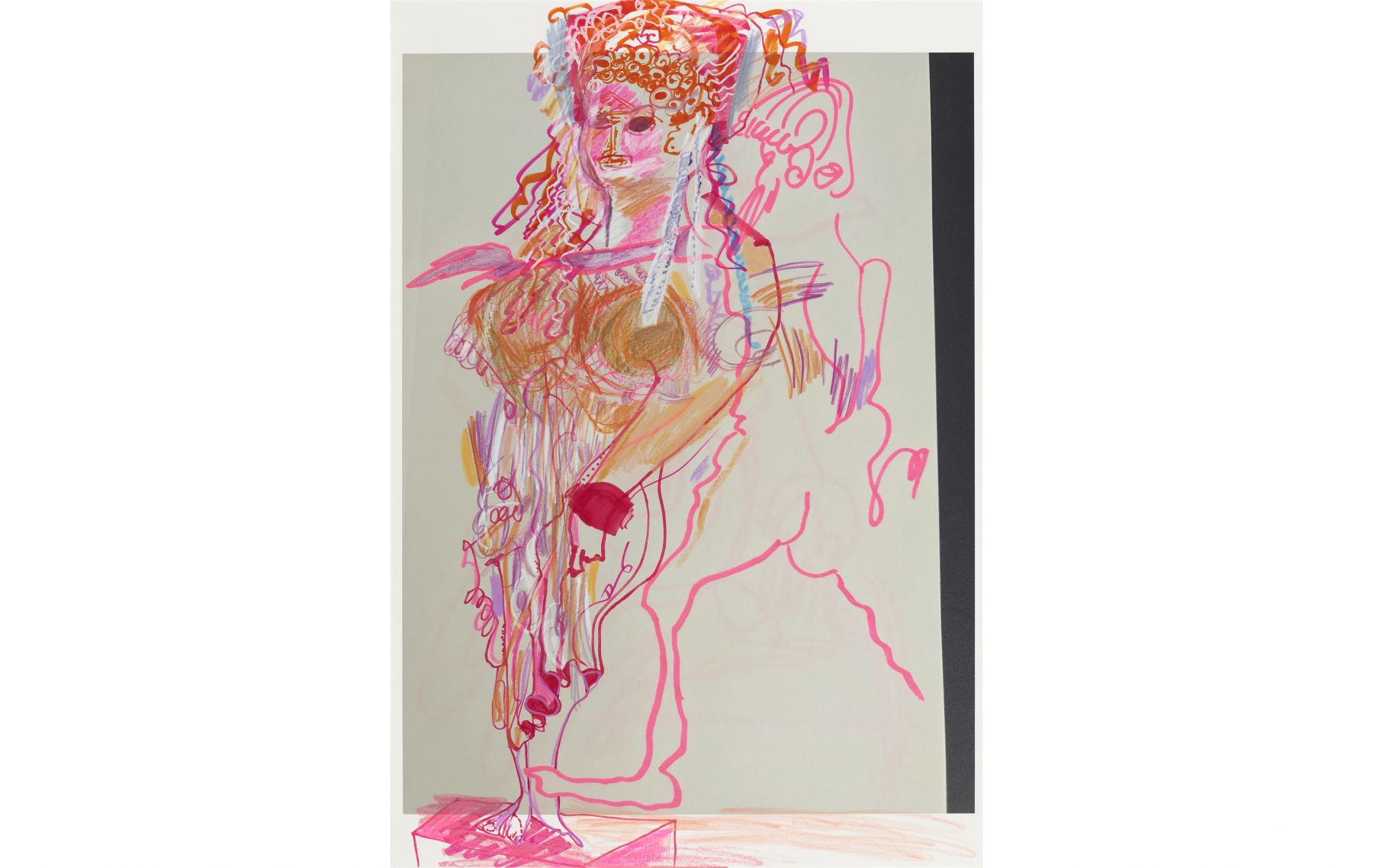 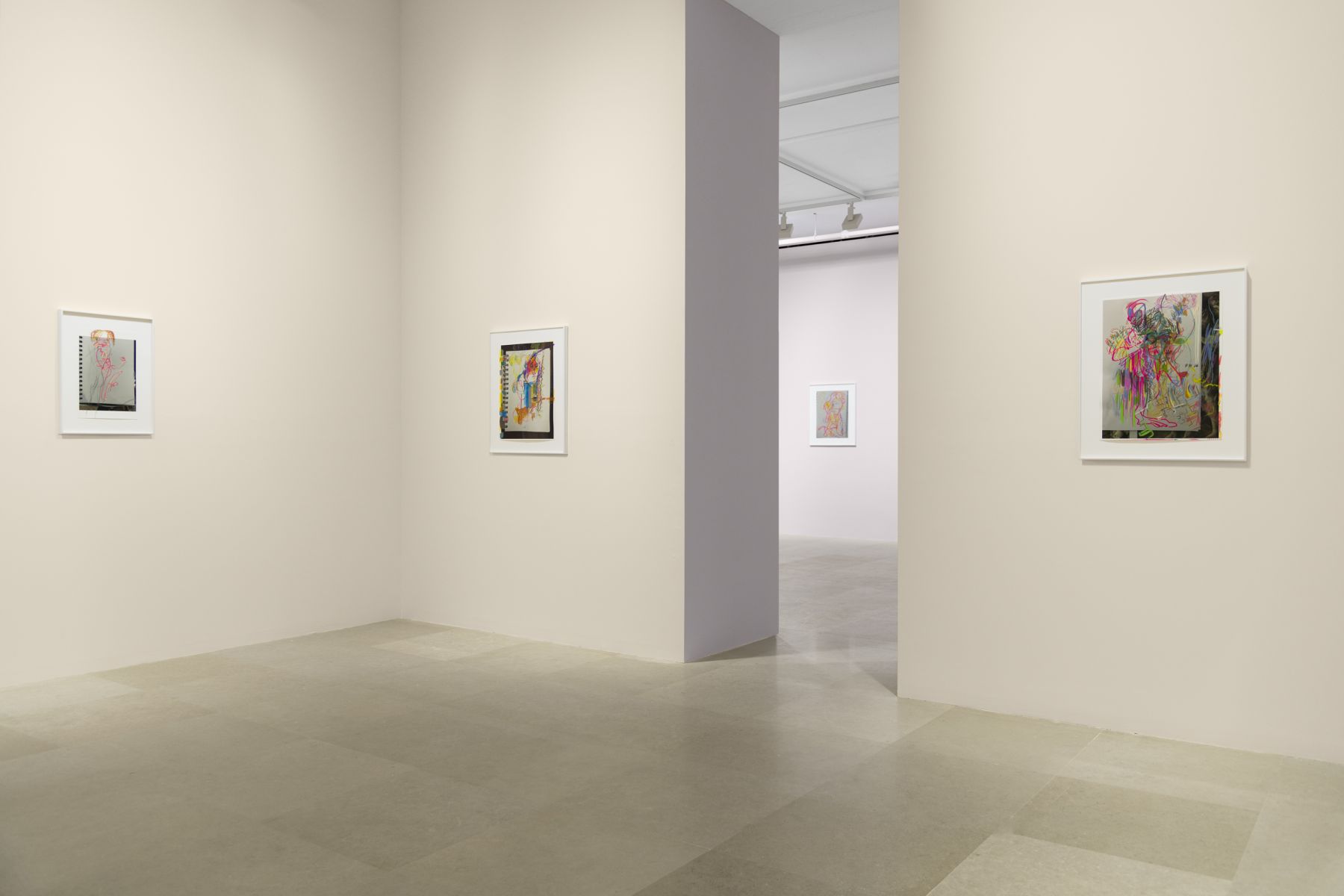 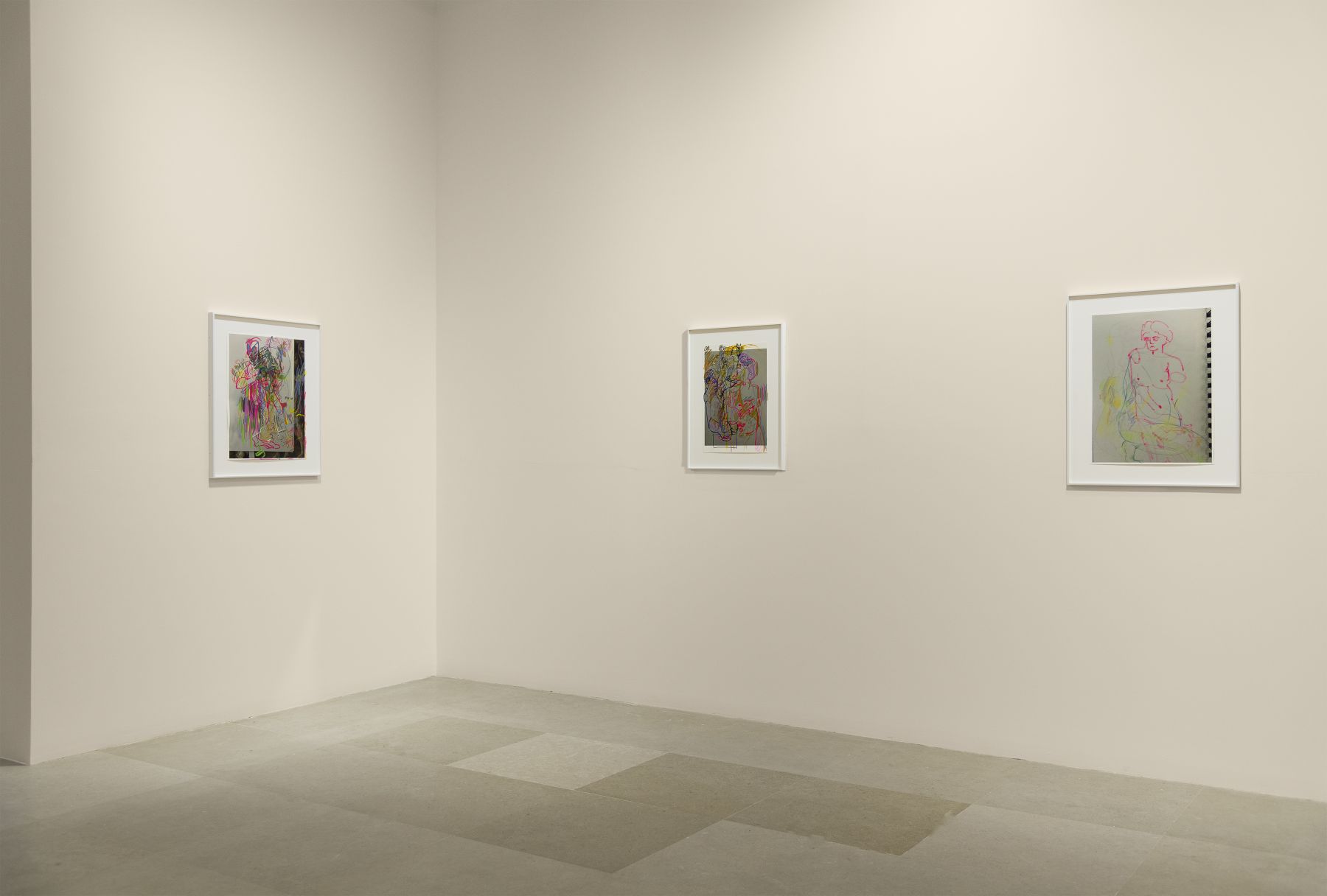 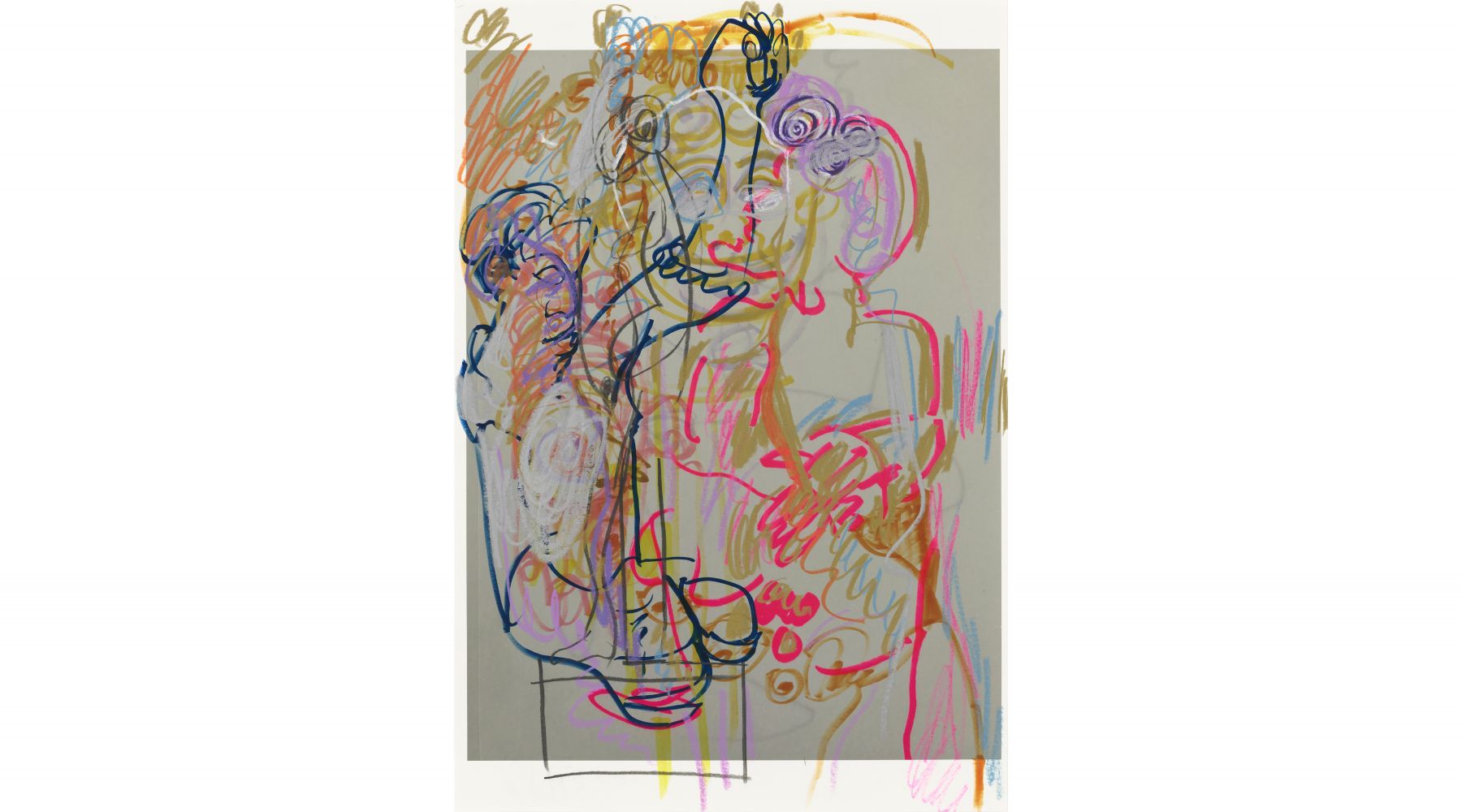 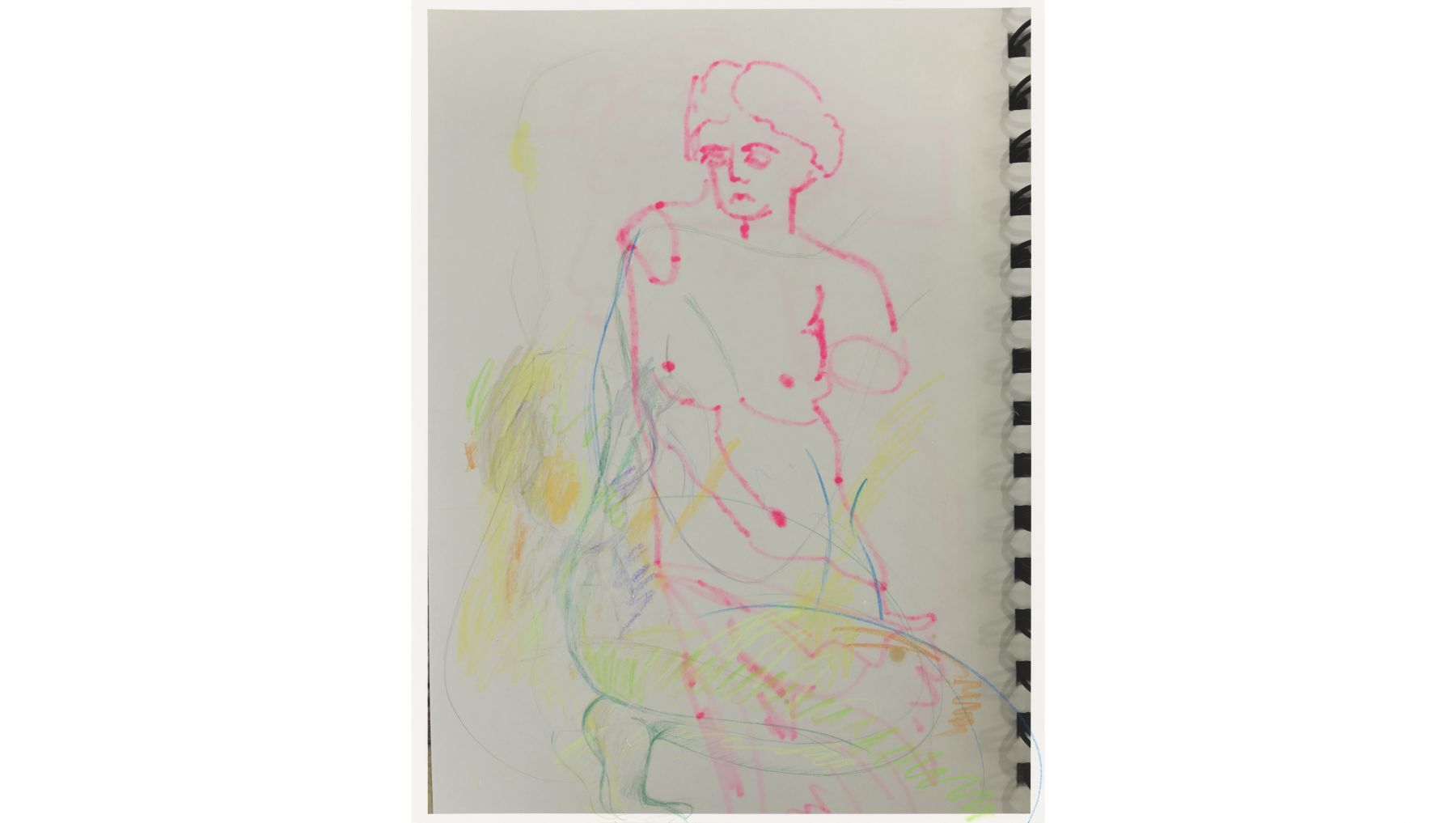 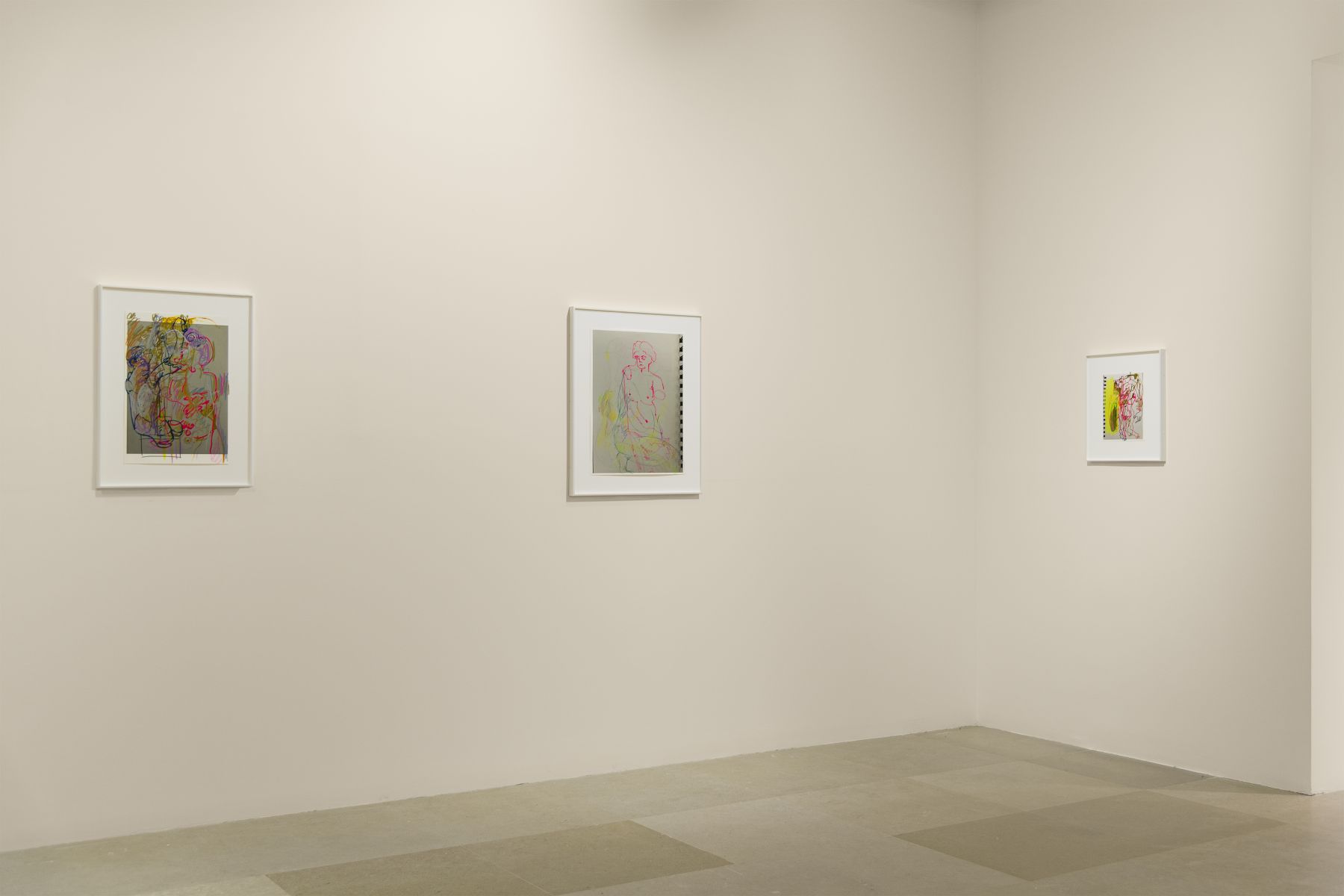 The following is an excerpt from a conversation between Anne Doran and Rachel Harrison in February 2020:

Looking at these drawings, it appears that they are all based on photos of pink line drawings in a bound notebook.

Where were you when you made them?

I had just moved into a new studio and wasn’t ready to unpack.

In the nineteenth century a series of major excavations of Greek and Roman statues were documented by French and British photographers. The relationship of the camera to sculpture goes back to its invention.

In the catalog for your recent survey at the Whitney Museum of American Art, co-curator David Joselit discusses your use of remediation, by which he means the act of transferring the effects of one medium onto another. He specifically mentions the remediation, through photography, of your drawing into sculpture. In Sunset Series (2000), you photographed one found photograph of a sunset over and over again, manipulating the physical photo and the lighting conditions to create multiple sunsets, all different from one another. Your pictures highlight the photograph as a three-dimensional object in space. In 2011, you made a book about Abraham Lincoln in which various representations of the 16th president (including a Lincoln throw pillow, a Lincoln jack-o’-lantern, and a five-dollar bill) are culled from the internet and ordered such that Lincoln seems to revolve in space over the course of the book. Here, you use photography to create the illusion of dimensionality. The figures often seem to be stepping out of the frame of the photograph. Do you see this series as related to these earlier two? How many different kinds of space are we talking about?

I just met these women with a start-up who were talking about printing the 4th dimension. They said that’s what people do in Brooklyn when they are not talking about Mars. 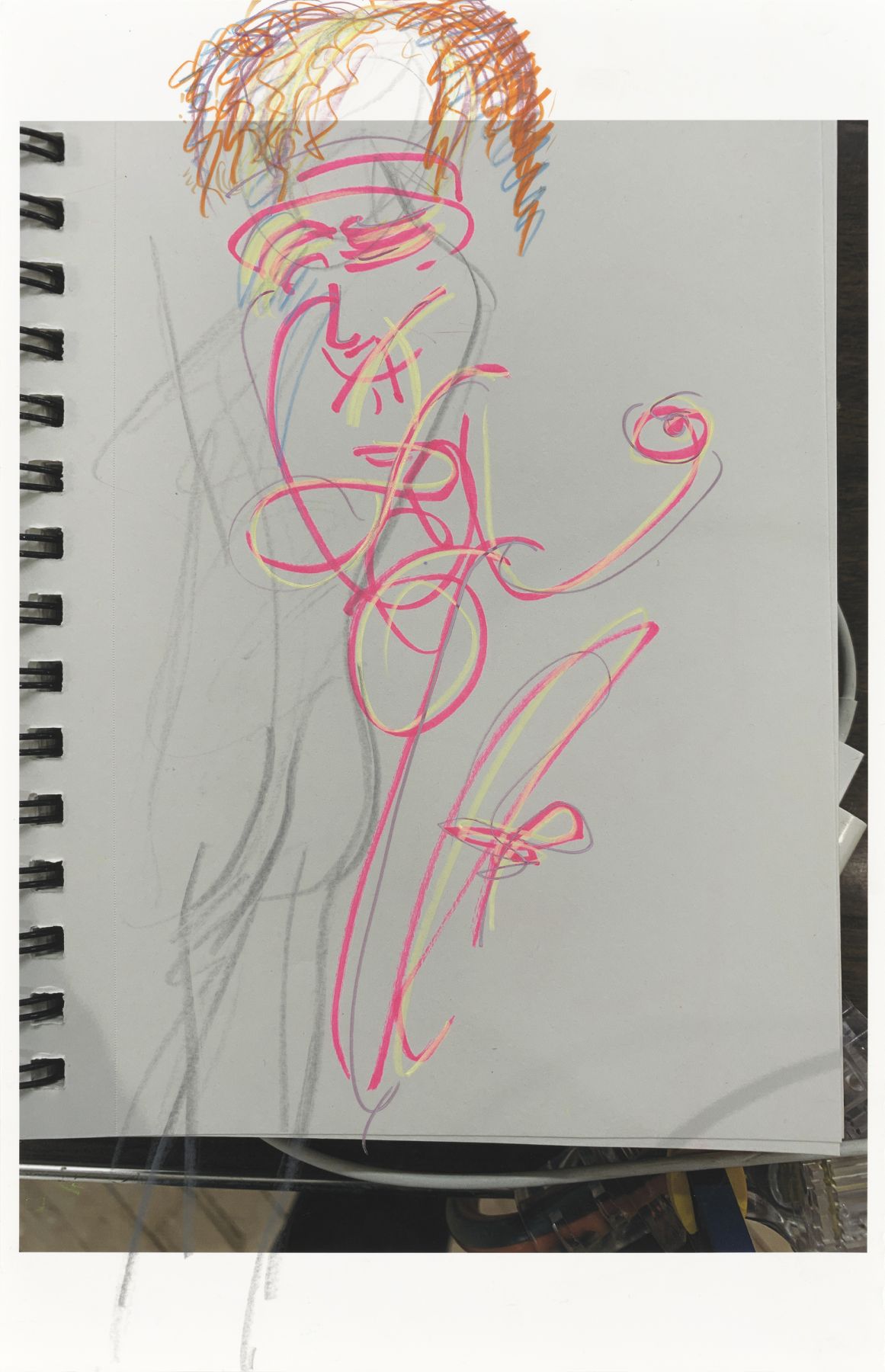 References to classical sculpture turn up in your work with some regularity. There was that model of the Winged Victory of Samothrace, flocked in blue à la Yves Klein, in a piece in your last show at the gallery. And then there are your Studs sculptures—each a standard wooden stud mounted upright on a base—whose relationship to classical sculpture, though not immediately obvious, was made explicit in a recent exhibition at Tokyo’s Rat Hole Gallery by your pairing them with photographs of often desecrated Greek statues. As writer and museum director Johanna Burton has noted, the studs are all warped, “[w]hich studs are prone to do if faultily treated; this staple of Western construction asks wood to behave against its very nature, which is to be neither rigid nor straight.”

There’s also the fact that by strange coincidence, you’re presenting these drawings at a time when our current administration has proposed making all US federal buildings conform to the Neoclassical mold. In his essay for this show’s catalog, artist Paul Chan writes that your art is non-salvific—i.e. it resists “the self-certainty and self-regard that announces authority’s appearance.” Do you consider your work political in nature? 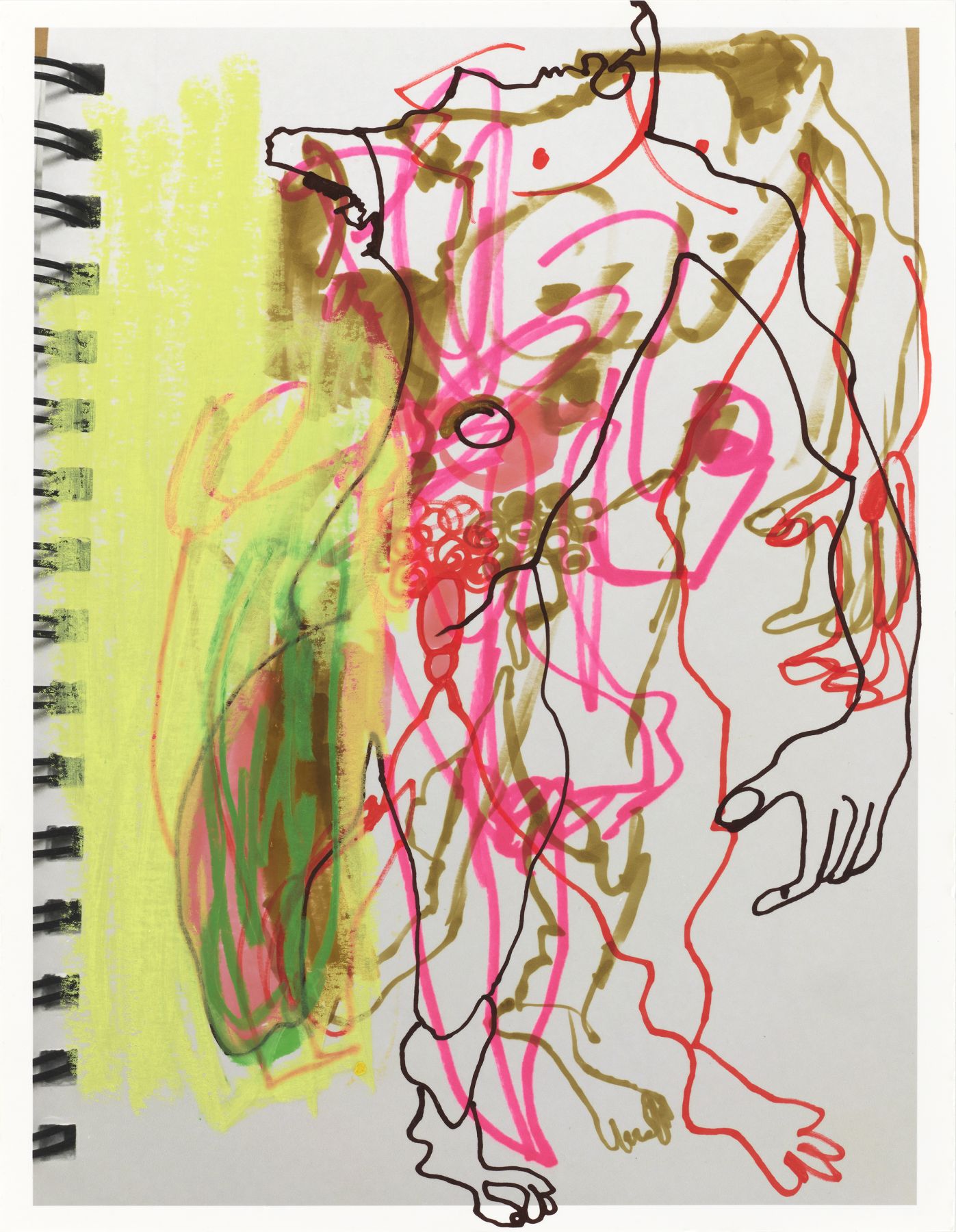 Looking again at your art of the past three decades, I’m struck by how many edges there are in your sculptures and installations—edges that demark zones, edges that create internal forms, edges that appear and disappear depending on the viewer’s position. But although some of these edges might trick the eye or cut into one another, every element in your works always retains its own identity. The layered contours in these drawings, for example, might interfere with one another, but each figure is clearly delineated. It occurs to me that while there are many intersections and overlaps in your works, there are no blurs. True?

Your physical presence is evident in many of these photographs. In some of them, for example, I can see your knees; I can see the book on your studio table; I can see the shadow of your iPhone.

You mean in some of these drawings? 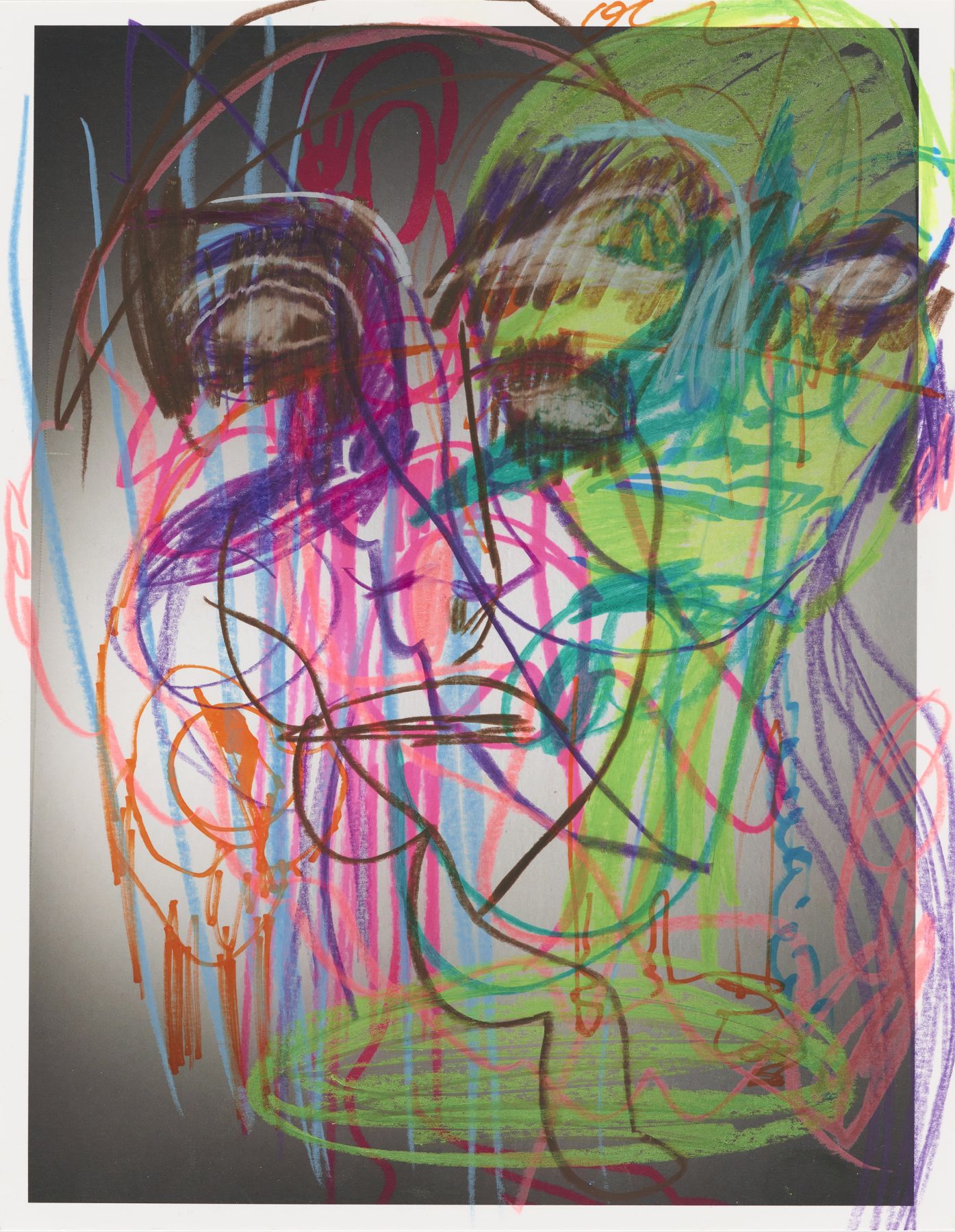 You’ve titled this drawing series The Classics, which to me gives it a literary spin—or maybe a musical or fashion-y one. Many critics have noted the persistent use of frames in your work—often nested inside one another and often involving photographs. Are frames like puns? Are puns like frames?

And how much has classical sculpture informed your work? A lot? A little? As much as anything else?

These days I think about how the word “class” is part of The Classics. 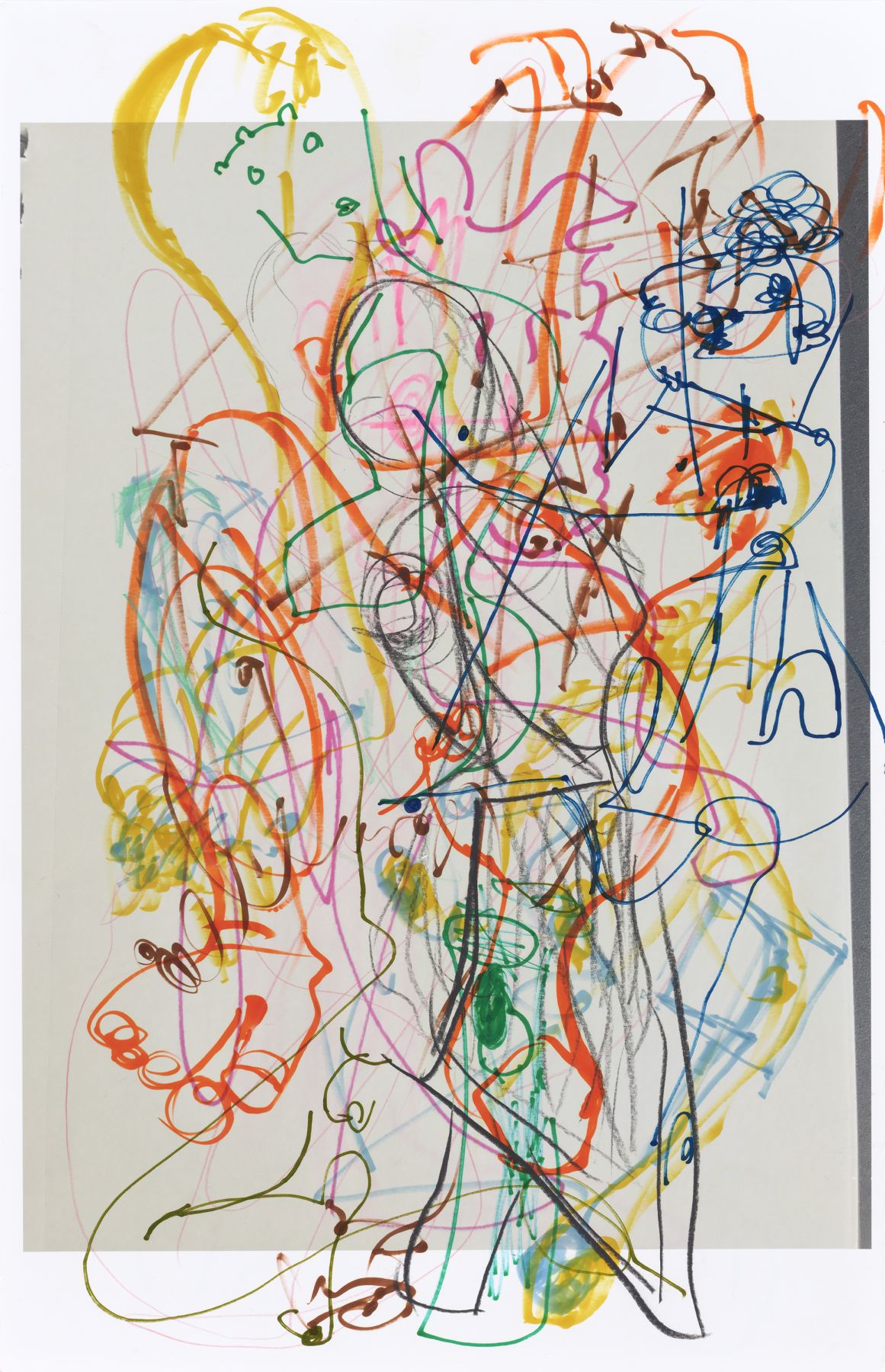 Your sculptures, even when as abstract as the Studs, are often not only semi-figurative, but anthropomorphic—they loom, they huddle, they stumble, they proffer and enfold. Sometimes they even wear shoes. And your 2007 photographic series Voyage of the Beagle is a boisterous grouping of found figurative images ranging from a prehistoric menhir to a stuffed polar bear to a kitten printed on a plastic toilet-seat cover.

It’s quite a crowded scene in these works. Why the layering of figures? Are they in conversation?

Italo Calvino wrote: “A classic is something that persists as a background noise even when the most incompatible momentary concerns are in control of the situation.” 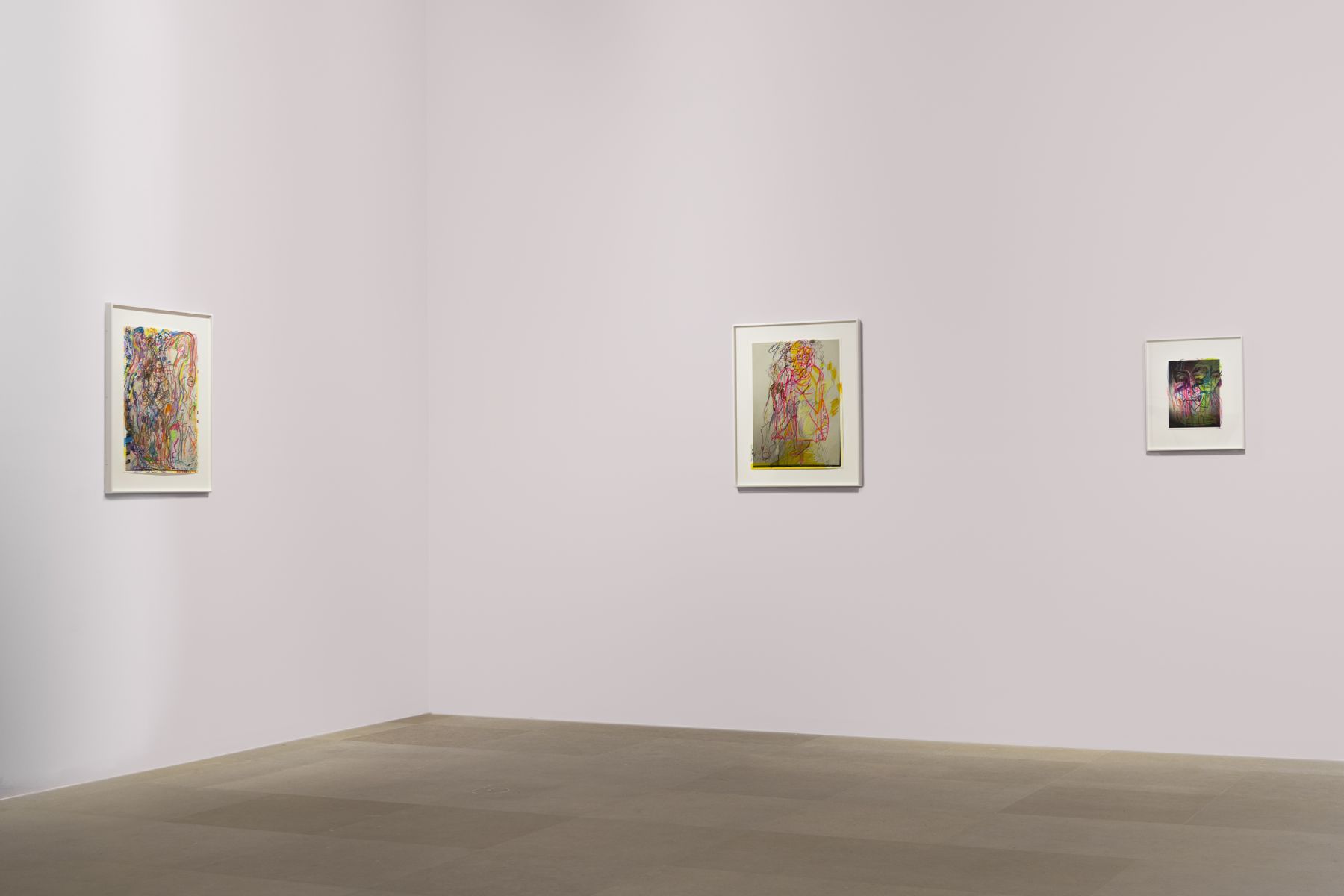 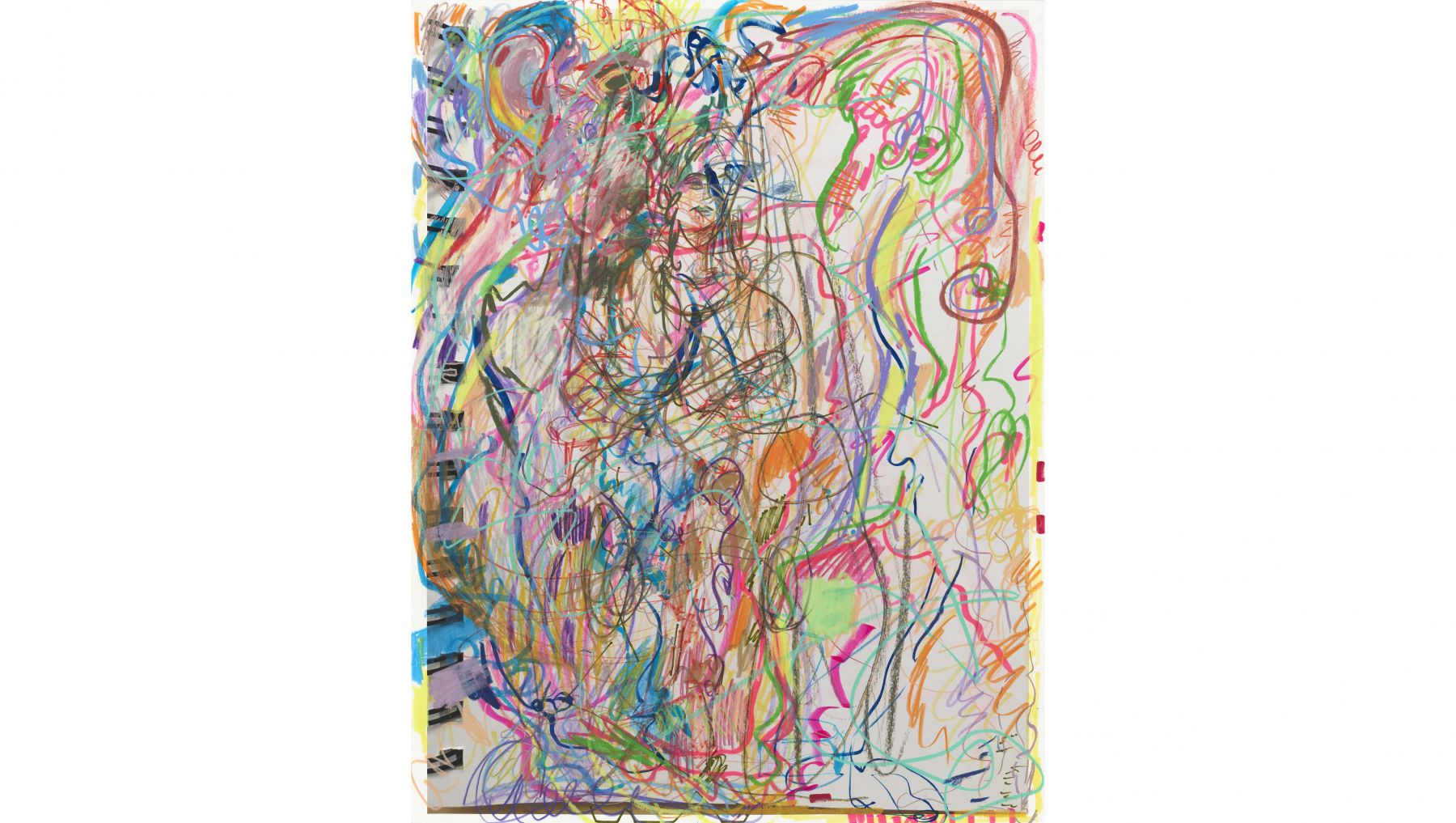 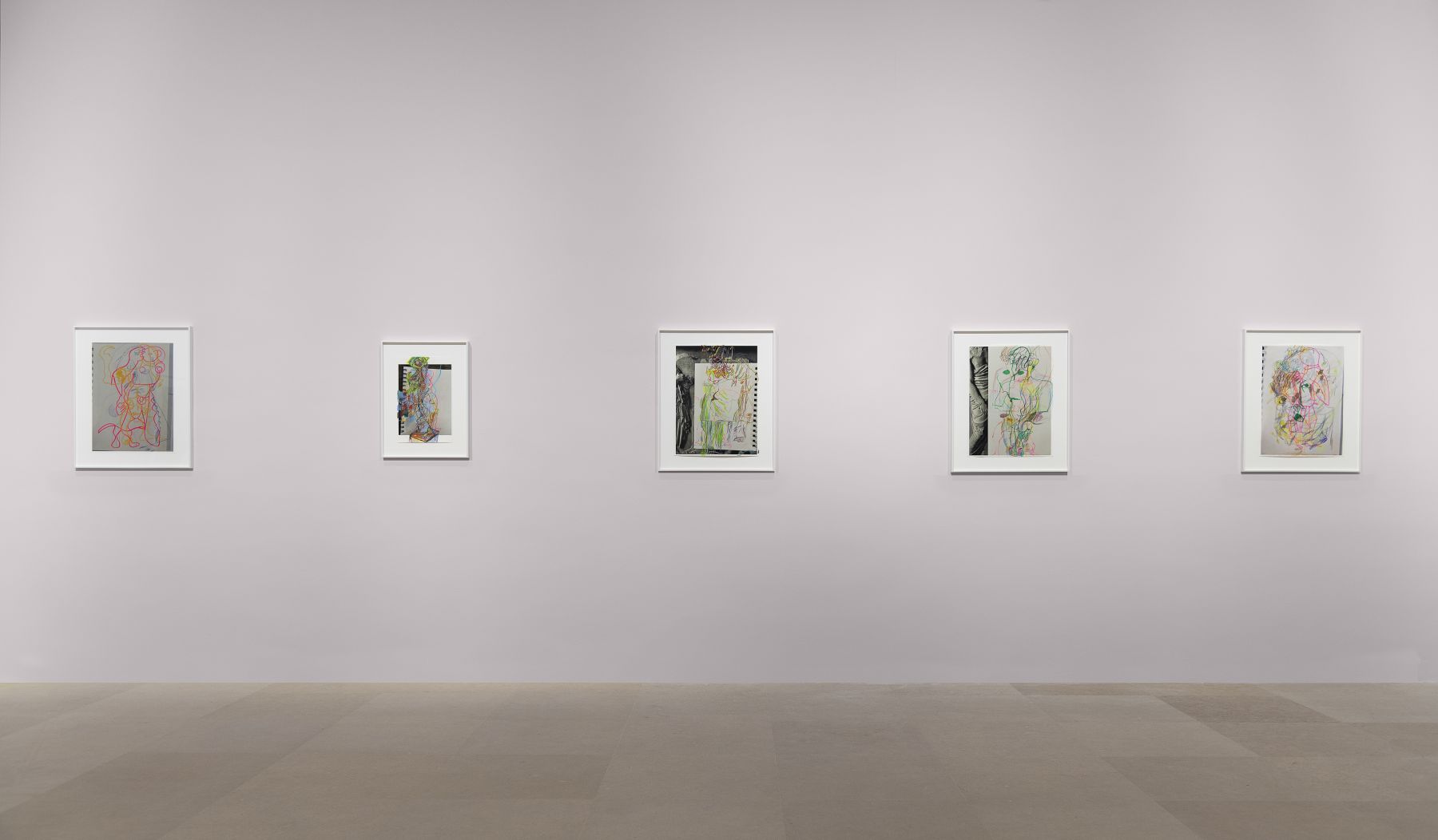 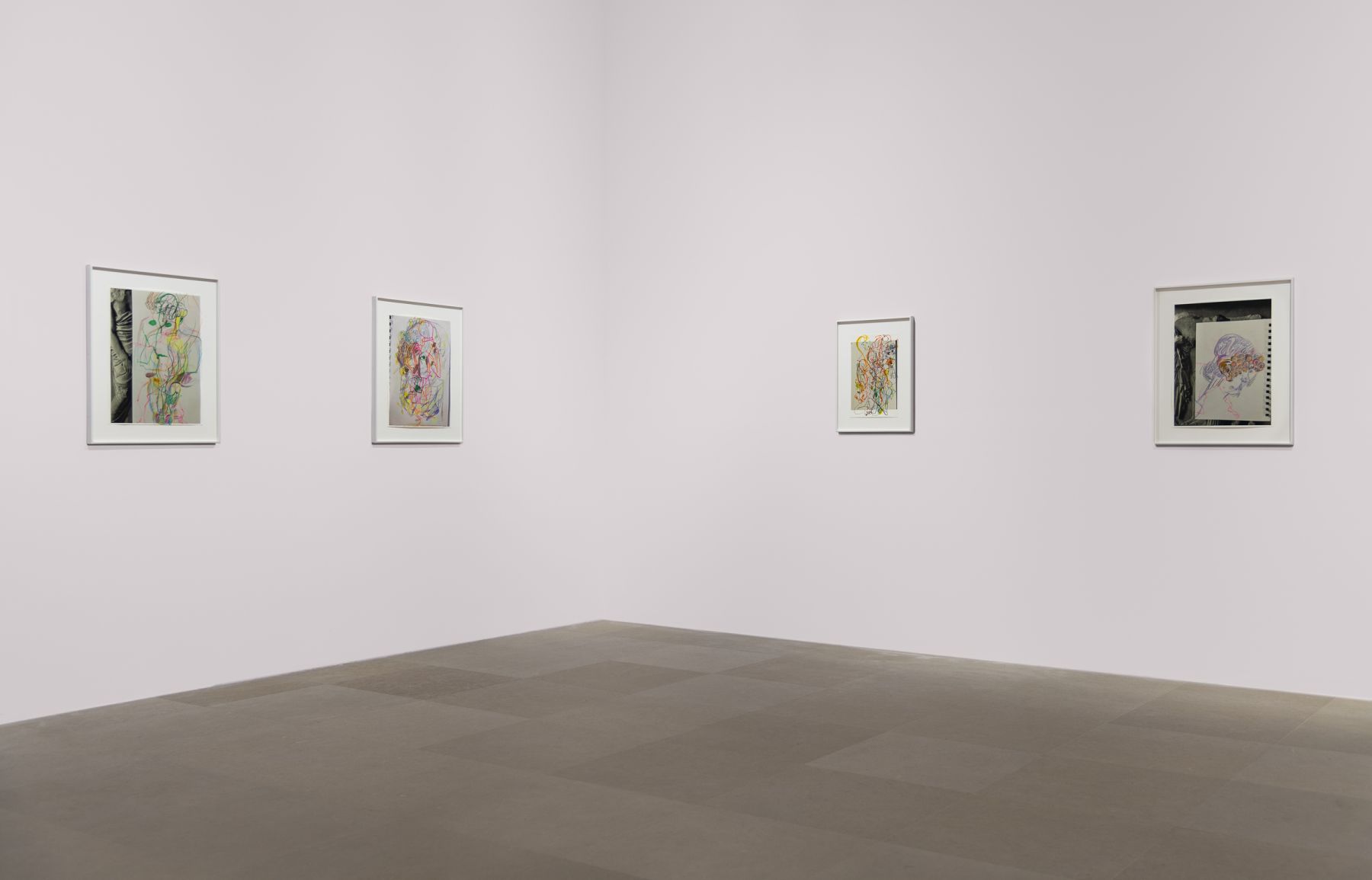 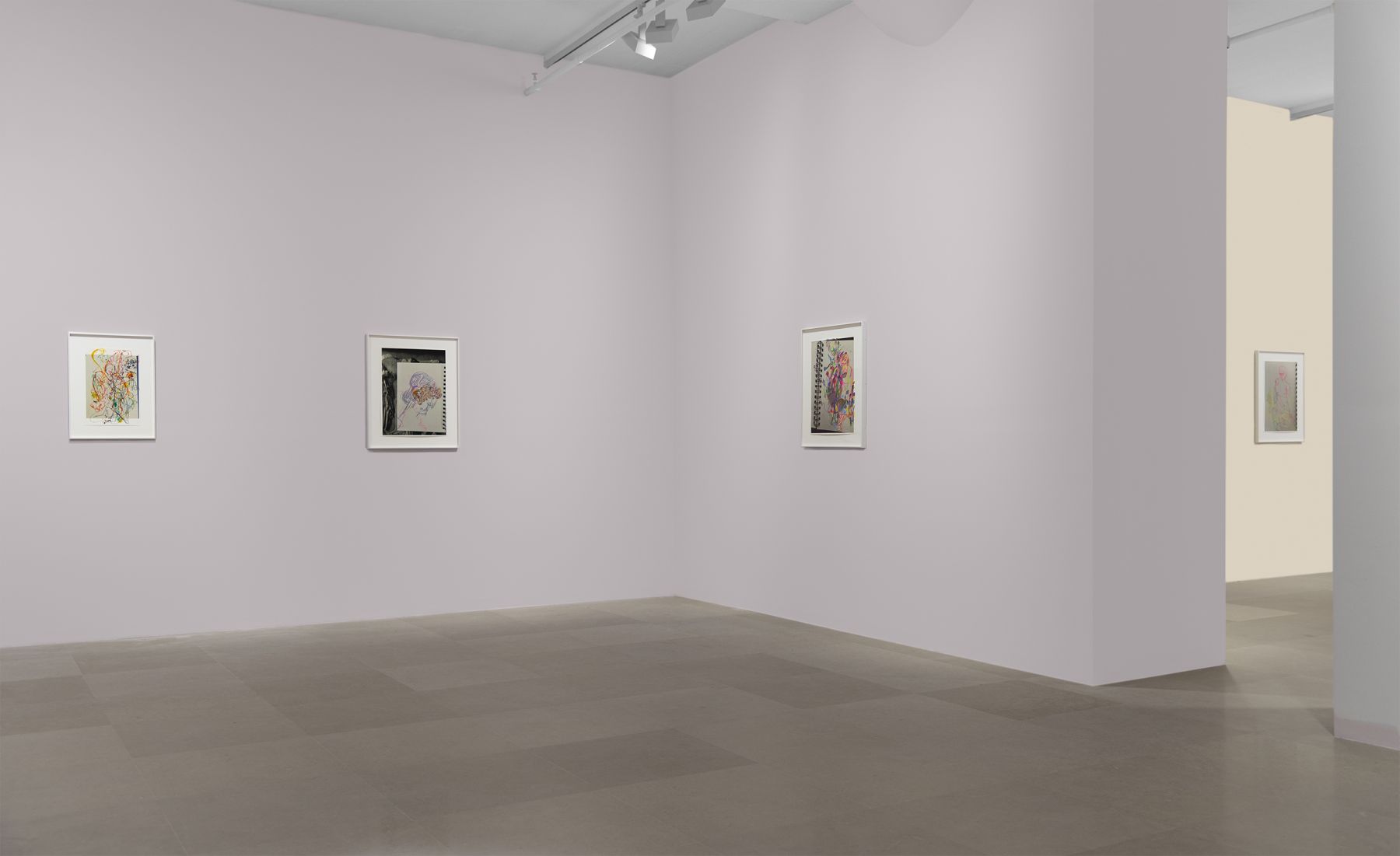 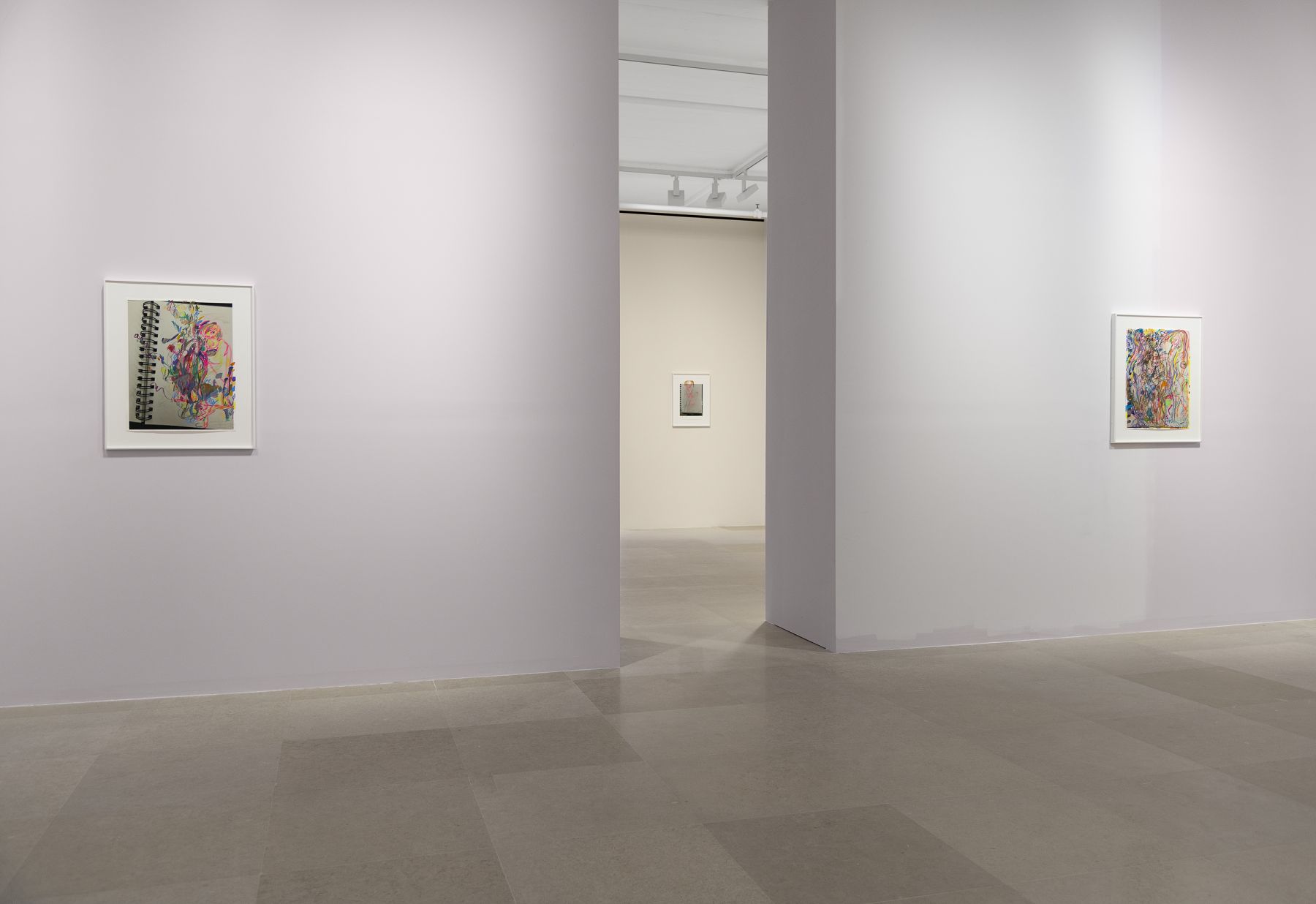